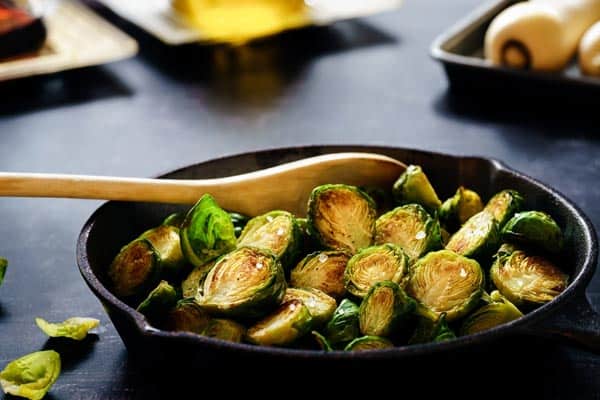 Everyone who routinely cooks at home needs to have a cast-iron skillet on hand. They’re easy to clean, long-lasting, sturdy, and when you compare them to cookware that features other materials, very cheap.

Generally speaking, these skillets are safe to use in the oven, and you can easily put them under the broiler and get the temperature up to 600-degrees Fahrenheit without worrying about damaging it.

Since they can get really hot, you should only handle them when they come out of the oven with a potholder, silicone holder, or an oven mitt. The exception to this is a skillet that has a wooden handle attached to it.

At baking temperatures, this wooden handle can easily split apart and break into several smaller pieces inside your oven, and broiling temperature exposure can cause them to catch on fire.

Instead of transferring your food items from a non-stick pan to a cooking pot, you can brown them on the stove, put them in your preheated oven, and allow them to finish cooking all in one pan.

Some popular comfort foods that utilize a cast-iron skillet are a steak that you pan-sear before finishing it in the oven, skin-on potatoes, roast salmon fillets, and chili.

A cast-iron skillet also works well to make cornbread, rustic bread loaves, or pizza. If you set your oven to the maximum temperature while it bakes, it’ll cause the heat to puff up your dough.

Why Cast-Iron Works for Preparing These Food Items

Cast-iron works very well for preparing this array of food because it conducts heat very poorly.

They can take a surprisingly long time to heat up or cool down compared to traditional cookware.

But, once they heat up, they can hold the heat for a long time while distributing it evenly across the cooking surface. However, there are foods that don’t do well in these types of skillets.

You want to avoid putting acidic foods like soups, sauces, or stews that contain vinegar, wine, or tomatoes into your skillet. The same goes for anything that requires it to simmer for a long period of time.

The cast-iron skillet will react to acidic foods by leaching dietary iron, and it’ll give the food a very strong metallic taste when you try it.

Can You Warp a Cast-Iron Skillet?

Just like you’d assume from the name, most of these types of skillets come made from a thicker piece of cast iron, and this makes them less prone to warping than steel, aluminum, or copper pans.

As a general rule, the heavier your skillet’s bottom is, and the thicker the walls are, the less likely it is to start warping. Many people think that it’s the base’s thickness that matters, but it’s typically the thinner sides that will start to warp first.

However, even the thickest skillets aren’t safe from warping. You want to avoid overexposing your pan to thermal shocks, including taking them out of the oven straight away and setting them directly on a stone countertop.

Additionally, you want to avoid putting your cast-iron skillet into the refrigerator when the skillet is still hot from using it in the oven.

Unless you’d like to damage both the cast-iron skillet and your refrigerator, you want to avoid doing this at all costs.

When you’re pulling a hot cast-iron skillet out of the oven, you should always use a potholder or oven mitt to handle it because the handles can get extremely hot.

Some skillets may come with silicone handle holders included, and this allows you to safely and comfortably handle the skillet, even when it’s piping hot.

These silicone handle holders will usually resist heat up to 450-degrees Fahrenheit.

You can also choose to get more traditional spiral-stitched leather handle holders that fit your cast-iron skillets and are oven-safe to touch up to 600-degrees Fahrenheit.

To use the handle holders, you’ll slip it over the handles as soon as you finish roasting, boiling, or baking your food to get the skillet ready to pull from the heat.

They’re also a good choice if you want to adjust your skillet’s rack in the middle of cooking to get a more even brown on your food.

You don’t want to leave the handle holders in the oven as they’re supposed to substitute potholders or oven mitts while giving you a better grip. Depending on how you set the oven, they can melt or get extremely hot if you leave them in there.

How Enameled Cast-Iron Skillets are Different

Any enameled cast-iron skillet will differ from a traditional one due to the coating. Enameled skillets feature a single-piece design with an enamel coating that many people call porcelain.

You don’t have to season them, they look fantastic, and you can safely put them in the dishwasher to clean them. However, you gain these things by trading sturdiness.

This coating on your enamel cast-iron skillets is also prone to chipping or cracking at high heat or if you accidentally expose it to thermal shock.

This is why a lot of enamel cast-iron skillets are not oven-safe at any temperatures over 400-degrees Fahrenheit.

Also, these types of skillets are usually made using thinner metal pieces, so it’s much easier to make it warp than a traditional cast-iron skillet.

Putting Cold Cast-Iron in the Oven

Although cast iron is very sturdy, it’s definitely not indestructible. You can break it if you drop it, and it can also break if you make it go through extreme temperature fluctuations.

Your skillet will crack if you put it in cold water when it’s still hot, so always allow it time to cool down before you wash it.

If your skillet has been chilling in the refrigerator and you put it straight into a hot oven, there is also a higher risk that it’ll crack.

The reverse is true, too, if you decide to go straight from the oven to the refrigerator, but you also run the risk of damaging the refrigerator as well as cracking the pan.

The nice thing about this type of skillet is that you can put it in an oven with higher temperatures for a reasonable time without ruining it.

If you want to season your cast-iron skillet, you can put it into the oven for around an hour at high temperatures without damaging it.

Most recipes will call for an hour’s cooking time, and your skillet should survive slightly more or less without any damage.

You’ll only need to do a few things to season your cast-iron skillet to keep it ready to go whenever you need it, including:

A cast-iron skillet can safely go in an oven for an hour or two at very hot temperatures without incurring any damage.

You can use it for cooking a broad range of dishes, and it’s easy to clean and maintain your skillet between uses, so it’s always ready to go.