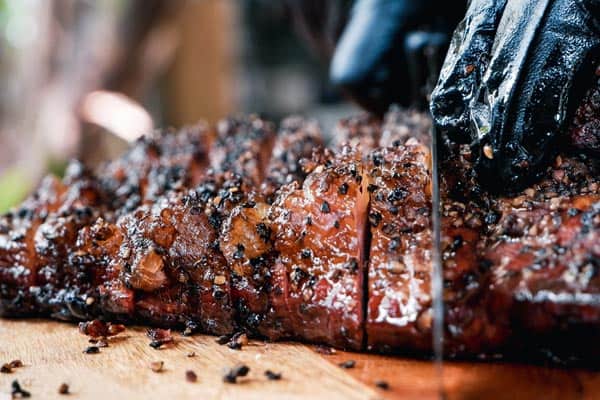 The USDA says that beef is the most popular type of meat grocery stores sell, and you can classify beef from cattle into different cuts and parts.

When most people think of a barbecue or cookout, they usually imagine at least one cut of beef with brisket and tri-tip, making up the two best options. The one you decide on will depend entirely on your preferences, but what is the difference?

The biggest difference between the tri-tip and brisket is where they come from on the cow. Brisket comes from the animal’s front while you get tri-tip from the animal’s back from the bottom sirloin. Since both of these cuts of beef come from opposite sides of the animal, they each have different textures and flavors you have to take into consideration when you cook them.

The brisket comes from the cow’s breast area under their first five ribs, and you usually buy it as a boneless cut that gets divided into two different cuts called the pointcut and the flat cut. You can get brisket in the Texas-style or packer’s cut that uses the entire brisket.

These cuts come untrimmed with both the flat and point included, and a full brisket like this can weight between 8 to 20 pounds while being 10 to 12-inches wide and 12 to 20-inches long.

Brisket is one of the toughest areas on cattle because these are the muscles that support a large portion of the animal’s weight, and a lot of connective tissue develops here since cows don’t have collarbones.

In turn, brisket is a very tough piece of meat that has to cook very low and slow to give the collagen time to break down with the fat and tenderize the meat.

How do You Prepare Brisket?

Locating and picking out a good brisket can be challenging, and you want to check any you consider for fat that is evenly marbled down the cut rather than all on the outside.

There should be a slight fat cap on the outer layers, but it’s the fat in the middle that helps keep the meat moist when it cooks. Your fat cap should be 1/4-inch thick and buying a brisket with it on allows you to trim it to your specifications.

The weight should be between 6 and 10-pounds because you’ll slow cook it at around 225-degrees for 1.5 to 2-hours for every pound of meat you buy. Bigger briskets will take much longer to cook thoroughly, no matter if you use a grill, smoker, or oven.

The first thing you have to do before you smoke anything is trim your brisket to get a good fat balance to enhance the meat’s taste as it cooks.

Not trimming the fat will lead to a very greasy feel and fatty taste, and trimming the fat too much will give you a dry cut of meat by the time it finishes cooking. A few tips to help you get that optimal 1/4-inch fat cap include:

The next step is to create a seasoning or rub to put on the outside of your brisket. If this is your first time smoking a brisket, you most likely want to do something easy and use a Texas-style rub with equal parts salt and pepper.

You can experiment using different spices to see which ones fit your personal tastes, but you don’t want to use too much and overwhelm the meat’s natural taste.

Take your brisket out of the refrigerator or cooler and give it 30 minutes to sit and warm up before applying a light layer of your dry rub evenly over the entire thing.

You want to apply pressure to work the rub into the meat before letting it sit with it on for one to two hours out on the counter, so it reaches room temperature. The brine and salt will dry the outside of your brisket in this time to help form a nice crust.

Put your brisket into your smoker with the fat cap side up and use a thermometer to monitor the meat’s internal temperature, so you don’t accidentally overcook it and dry it out.

Set the alarm to go off when the temperature reaches 195-degrees because this indicates that your brisket is done. The thermometer will also tell you when the brisket stalls and the temperature sticks between 150 and 160-degrees.

When the brisket stalls during cooking, all it’s doing is starting to evaporate the moisture while wicking away the heat.

This process can take one to two hours from start to finish, and you can wait it out or wrap your brisket in butcher paper or tin foil and put it back in the smoker. Remove your brisket when it hits 195-degrees for the internal temperature.

Once you remove your brisket from the smoker, you have to let it rest for at least an hour in by wrapping it in parchment paper and aluminum foil.

Wrap a towel around the aluminum foil layer to help retain the heat. After an hour, remove the brisket and slice it working against the grain. Cutting it this way makes the brisket more tender and palatable.

You’ll find the tri-tip on the other side of the cattle, and the tri-tip is a roast that gets cut from the sirloin primal’s bottom area.

You may hear this cut referred to as the triangle roast or the bottom sirloin butt, and each animal has two tri-tips. This is one of the most flavorful cuts you can get outside of brisket, and an entire untrimmed tri-tip roast will weigh around five pounds.

A trimmed roast will usually weigh between 1.5 to 2.5-pounds with a two to three-inch thickness. Many grocery stores stock the cut version of this roast, and tri-tip is very popular in the Western United States as an individual category in many barbecue competitions. This earned it the nicknames of the California cut and the Santa Maria steak.

How do You Prepare Tri-Tip?

People who cook tri-tips are very different from the people who cook brisket, and many recipes demand that you use an untrimmed cut with a thick fat layer intact.

However, you don’t need this fat layer as it doesn’t add much to the overall cooking process or taste profile. Since this is a naturally tender cut, you won’t need to cook it low and slow like you did the brisket. You also won’t lose a lot of weight due to shrinkage and fat removal.

Start by trimming off any fat pieces you see on the meat before patting it dry with a paper towel or two. Doing this before you cook it will help reduce the amount of steam there is during the grilling process, and this means that your meat will sear much better. Pick out your favorite rub or go with the traditional salt and pepper option if you don’t have one.

The next step you take depends on the type of smoker you have at your home. If you have a charcoal smoker, you can get enough charcoal to fill a chimney starter before adding your chunks of wood.

If you have an electric smoker, you’ll want to add enough wood chips to cook for several hours while setting your temperature between 250 and 275-degrees.

You’ll also have to consider when you want to sear because some people insist on searing it first to lock in the juices while other people want to sear the meat at the end of the cooking process. You want to cook the meat until it reaches 135 to 140-degrees for internal temperature.

Since this is a smaller cut, the smoking process will take around an hour or two to reach this safe internal temperature, and you can sear it for 45 to 60-seconds on your grill to lock in the flavors.

Once you reach the correct temperature, you have to let the meat rest for at least 20 minutes to give the juices time to meld and sink into the meat before slicing the tri-tip against the grain and enjoying it.

The Biggest Differences Between the Brisket and Tri-Tip

Now that you know what these two cuts of meat are, where they come from, and how to prepare and cook them, we’ll outline the biggest differences. This will help you really get a good grasp of both types of meat.

The size is one marked difference that allows you to tell if you’re looking at a brisket or tri-tip at a glance because it’s a significant difference.

The entire tri-tip weighs between three and four pounds while a brisket weighs up to four to five times more at 12 to 20 pounds. You can fee a family of four to six with one tri-tip, but you can feed a whole party on one brisket.

When you break down the price between the two cuts, you have to consider how much you pay per pound because you’re getting a significantly larger amount of meat with the brisket.

You can find brisket for $3 to $4 per pound and tri-tip at $6 to $8 per pound at your local grocery store or butchers. You also have to factor in that you trim fat from the brisket and not from the tri-tip.

Brisket is a very tough cut of meat while tri-tip is very tender, and this is why it’s so important to pay close attention to the cooking methods and times.

Cooking a brisket on a low and slow heat gives the fat and connective tissues time to break down to tenderize the meat, and cooking tri-tip for too long can easily dry it out and make it tough since it’s tender, to begin with. Both have a very beefy flavor profile.

Tri-tips usually come in a triangular form with a light amount of fat marbled through the meat while a brisket is a more rectangular cut with heavier fat on the inside and outside.

Briskets also get a beautiful crust on the outside when you grill or sear them while a tri-tip has a slightly lighter appearance.

The fats and cartridge in brisket give it a very deep beefy flavoring, and the higher fat content makes it slightly more greasy with burnt and crunchy ends.

Tri-Tip also has a beefy flavoring to it, but it tastes much less fatty than brisket. They both have a slightly buttery taste that goes well with a broad range of side dishes.

Tri-tips and briskets are excellent cuts of meat that cook up to a wonderful meal, which is especially true if you smoke them in your pellet grills or smokers.

You can experiment with cooking times, styles, temperatures, and rubs to create a family-friendly meal that you can’t wait to eat.