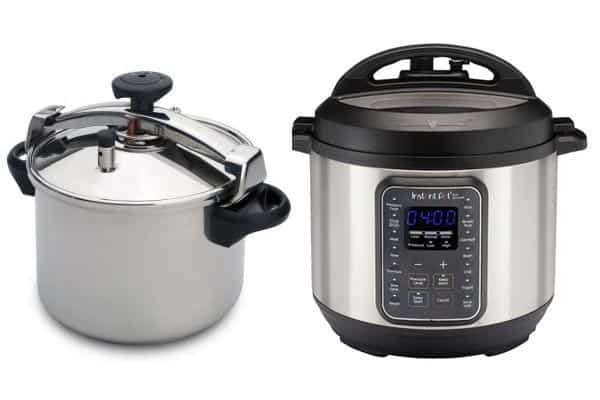 In this article, we’re going to help you understand what pressure cookers and instant pots are, as well as how they work. Then, we’ll dive deep into the benefits each of them offer and which one has more to offer you.

What Is A Pressure Cooker And How Does It Work?

A pressure cooker is just as the name suggests: it’s a piece of kitchen equipment that uses high pressure to prepare meals. To be exact, it uses high levels of steam pressure which cooks food faster and much more efficiently.

Pressure cookers consist of an air-tight pot and a valve that regulates their internal pressure. They don’t generate heat by themselves, which is why you’ll need to place them on a stove to heat and cook the ingredients inside.

Because the heat and air have no way of escaping, the food inside gets cooked much quicker than with other methods. Plus, a lot of the flavor is also retained because none of it is lost to evaporation like when cooking on a pan, for example.

Pressure cookers have been around for a very long time. The first commercially available unit was first revealed in the late 1930s before people were able to buy it in 1945. Even today, pressure cookers are still very popular and are widely available anywhere kitchen equipment is sold.

What Are The Benefits Of A Pressure Cooker?

Pressure cookers offer you loads of benefits in the kitchen. They include:

The primary selling point of a pressure cooker is that it helps you prepare meals much quicker. That’s especially true with food items that involve a lot of moisture like stews, soups, and items that require steaming.

The reason for this is the boiling point inside the pressure cooker is much higher. With higher heat, food items inside will be thoroughly cooked much quicker.

Quick-cooking isn’t all that pressure cookers are known for. They’re also known for making more flavorful meals, because of how effectively they preserve the flavors and nutrients of the ingredients being cooked.

The reason pressure cookers can do this is that the entire cooking process is sealed in an airtight pot and performed using high-pressure steam.

For one, none of the flavors escapes through evaporation like it would when using other cooking methods. Besides that, the high-pressure steam also drives the flavor deeper into ingredients like meats and vegetables.

The result? Meals that are noticeably tastier.

Another reason pressure cookers are so popular is that they’re very easy to clean. You can wash a pressure cooker right in your sink using dishwashing soap and a sponge, just like you would with the rest of your plates.

As mentioned before, pressure cookers do not generate their own heat. So, you’ll need to use them on top of a stove to pressure-cook your food.

The good news here is that pressure cookers are incredibly versatile. They’re compatible with gas stoves, electric, glass-top stoves, and just about any other type there is.

As long as the stove can provide heat, the pressure cooker can do its job!

Even though pressure cookers are built solid and seal tightly, they still have a limit to how much pressure they can handle. That’s why pressure regulators are a standard feature on these types of cookers.

Those mechanical regulators ensure that when the pressure reaches a certain point, some of it will be released through a pressure release valve to keep things safe.

What Are The Drawbacks Of Using A Pressure Cooker?

Despite all of the benefits offered by pressure cookers, they also come with their fair share of drawbacks as well. Those include:

The Need For Adjusted Recipes

Unlike standard cooking methods, using a pressure cooker exposes the ingredients to more heat and steam pressure than usual. As such, the recipes that you’re using will need to be adjusted to take that into account.

Bear in mind that cooking recipes aren’t written with the pressure cooker in mind unless they explicitly say so. Unfortunately, that means you’ll need to convert the recipe by making several adjustments.

For instance, you’ll need to shorten your cooking time when using a pressure cooker to avoid overcooking the food. Besides that, volumes for stocks and other liquids also need to be adjusted, seeing how much less of it will be lost to evaporation.

The process of converting your recipes for the pressure cooker is likely to involve plenty of trial and error. So, until you get things perfect, you’ll probably make mistakes along the way.

Even when you’re using recipes specially designed for pressure cookers, it’s pretty easy to make mistakes. For starters, it’s not possible to check on your cooking halfway through. That’s because opening the pressure cooker will release all the pressure necessary for it to work correctly.

That’s why trial and error and experience are crucial to enjoying the benefits that a pressure cooker has to offer. It’ll take a bit of time for newbies before they’re cooking perfect meals using a pressure cooker.

So, if your food is a little too salty or not spicy enough, you’ll only find out when it’s done. But, unfortunately, by that time, it might be a little too late.

What Is An Instant Pot, And How Does It Work?

An Instant Pot is a multi-functional cooking appliance that acts as a pressure cooker, slow cooker, rice cooker, and many more; all rolled into one. The name ‘Instant Pot’ is e name of a Canadian brand that invented the appliance.

However, other leading appliance brands like Breville and Cuisinart have also created similar appliances, generally known as multi-cookers.

Most importantly, Instant Pots allow you to set and forget or automate your cooking. The control panel on the front of the appliance offers plenty of one-button controls. So, all you have to do is load your ingredients into the pot and select whatever cooking mode you need.

Instant Pots also have a Delay Start feature that comes in handy for busy people to top it all off. Imagine being able to load your ingredients into the Instant Pot and set it to start cooking hours later. By the time you walk through the front door, your freshly cooked meal would already be waiting for you in the Instant Pot.

What Are The Benefits Of Using An Instant Pot?

Instant Pots are popular for several good reasons. Here are a few of the benefits of using an Instant Pot.

Instant Pots are incredibly popular because they offer the same benefits as pressure cookers, though they’re much easier to use. In addition, being an electrical appliance means that there are plenty of settings and options you can choose at the push of a button.

You can use an Instant Pot fresh out of the box to make meals without any practice or cooking knowledge beforehand.

Part of the reason Instant Pots are so easy to use is that they come with plenty of ready-to-use functions and presets.

For instance, you could load similar ingredients into the Instant Pot but turn it into several different things. Then, all you’d have to do is select the preset button to make soup, stew, porridge, or rice.

With this type of one-button operation, there’s no need for making any adjustments or additional inputs at any stage of the process. As a result, you can rest assured that you’ll get the results you want at the end of the cooking process.

Remember: an Instant Pot is still a pressure cooker, albeit an electric one. So, it offers similar benefits as to those of conventional pressure cookers, with significantly faster cooking times.

The entire cooking process happens in a sealed pot that drives much more heat into the ingredients, thereby cooking them much quicker than conventional cooking methods.

For instance, it can control the pressure inside the pot automatically. That will ensure that the pressure levels are ideal for optimal cooking performance while also keeping the entire appliance safe at all times.

Besides that, there are also safety features to ensure that the lid is closed and free from any leaks before starting the cooking process.

What Are The Drawbacks Of Using An Instant Pot?

Here are some of the drawbacks of using an Instant Pot in your kitchen:

Sure, Instant Pots have automated cooking presets that you can select with just the push of a button. Still, you’ll probably want to use the Instant Pot for cooking your favorite recipes at some point.

To do that successfully, you’ll need to adjust your recipe and perfect it using trial and error.

Instant Pots are electrical appliances, so you can’t load the entire unit into a dishwasher and clean it that way. So, cleaning isn’t as easy with an Instant Pot as it might be with a conventional pressure cooker.

Even though Instant Pots offer lots of conveniences, there’s still a learning curve involved. At first, all of the presets and features can be pretty overwhelming because there are too many options to choose from.

So, when you first get your hands on an Instant Pot, you’ll still need some time to figure it all out.

Pressure Cooker Vs Instant Pot: Which One Should I Buy?

Here are three quick reasons why that’s the better choice:

On top of that, Instant Pots also come in a variety of models at different price ranges.

Pressure cookers are still fantastic pieces of kitchen equipment, despite having been around for many decades already.

However, they can’t beat Instant Pots and similar appliances that offer way more in terms of convenience and automation.