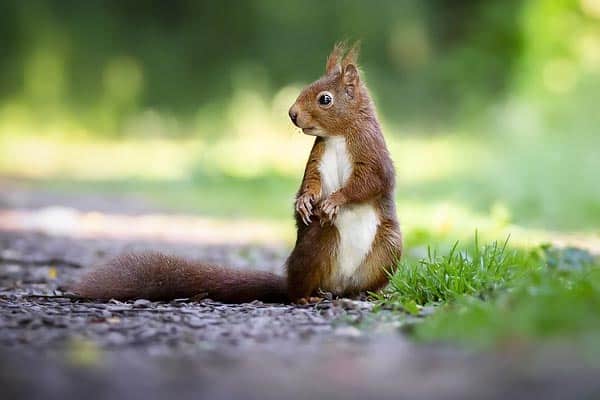 Although most people consider squirrels to be nuisance animals, it can be disconcerting to find a dead animal lying in your yard.

It’s even more unnerving if you find more than one dead squirrel in a short amount of time around the same area. What could be causing the squirrels to die in your yard?

Squirrels can keep dying in your yard because of poisoning, disease, predation, or electric shock.

However, unless you go out and request a necropsy sample from every squirrel you find deceased, you might never find the true cause.

However, there are some steps you should take if you find a dead squirrel or two in your yard to keep everyone safe.

The most important thing you can do is to never touch a dead squirrel, or any dead animal, with your bare hands.

Instead, you want to ensure that you wear protective gloves before putting the dead squirrel in a secure plastic bag.

You should also make a point to wash down the area where the dead squirrel was to prevent spreading diseases.

We’ll go over several reasons why squirrels could keep dying in your yard and what to do about it below so you’re ready if it ever happens to you.

Potential Reasons Why Squirrels Keep Dying in Your Yard

This is a difficult question to narrow down an answer to because there isn’t enough research to get a definitive answer, so trying to understand the morbidity rate of squirrels is mostly guesswork.

A thorough investigation would require doing a necropsy, and you have to do this very quickly after the squirrel dies.

A lot of the time, most people’s curiosity doesn’t go much further than curiosity or mild concern when they find a dead squirrel in their yard.

Most people aren’t concerned enough to do a very deep dive into why the squirrel died, and they don’t want to put the effort and time into solving this mystery.

But here are a few great reasons why you could keep finding dead squirrels in your yard, and we’ll outline the biggest ones below.

Squirrels can contract several different diseases and Purdue University pointed out that although there are disease signs that are very similar, it’s not possible to tell exactly what is wrong without doing specific tests, exams, or lab work.

It’s illegal to poison squirrels in several states, but it’s possible that your squirrel had exposure to non-toxic substances.

Chipmunks and squirrels are very common garden pests, and it’s not uncommon for them to get into contact with deadly pesticides that you put out for other animals and they were exploring the yard.

Rat poison is a blanket pesticide that is lethal to any small rodent that comes into contact with it, and someone in your neighborhood may have laid some out to deal with a rodent problem, and the squirrel found it.

Most of these rodenticides have a host of anticoagulants in them, and this ingredient stops the liver from being able to produce clots.

If you think that this is the issue, you should safely get rid of the dead squirrel as soon as possible.

If you have dogs or cats that can get outside on a regular basis, they could have been a factor in the squirrel’s death. Squirrels are one of the most common rodents in most neighborhoods, and your pet may have caught it.

Squirrels are very skilled climbers, but this won’t necessarily keep them out of trouble. Even though squirrels are usually very careful when they go up and down power lines, they could make a mistake and die from an electric shock.

The squirrel could have fallen when it was running through the trees and died of head trauma. Squirrels are usually very agile, and they could survive falls from a decent level without a problem. But, there is a chance that the squirrel fell and suffered from head trauma. This could result in the squirrel’s death

Some squirrels aren’t above faking being dead, and they could fall out of the tree and lay very still on the ground for a minute or two. The squirrel could then get up and run around like nothing is wrong. If you spot a squirrel, leave it alone for around 30 minutes and see if it moves. If not, it’s most likely dead.

What to do About Dead Squirrels in the Yard

There are a few things that you can do when you find a dead squirrel in your yard. They include but not limited to:

Although no one wants to see their yard turn into a squirrel graveyard, there are several reasons why you could find dead squirrels.

Poisoning, diseases, viruses, shocks, and pet predation are the most common factors, and potential head trauma is less likely. Without performing tests on the animal, it’s very difficult to tell. As long as you safely dispose of them, you should be okay.

Make sure that you keep your pets and kids away from the body before you dispose of it, and talk to the neighbors to see if they have problems too.

The only way to tell what’s wrong is to have a necropsy done on the body. If you’re not worried, just remove the squirrel, bag it in two trash bags, and toss it.

You could contact the local DNR if you’re not 100% sure what to do to ensure you’re getting rid of them correctly.